D.W. Winifred Read is a preschooler who is Arthur's younger sister and Kate's older sister.

Like the rest of her family, D.W. is an anthropomorphic aardvark. She has short, light brown slightly curled/waved hair in the form of a bob cut, which is up to her cheeks; plus, she has bangs. She wears a white long-sleeved blouse, a frilly sleeveless knee-length magenta jumper dress, frilly cream-colored or white panties, light pink pantyhose and blue-and-cyan strapped Mary Jane shoes. D.W. Read is the second oldest of the aardvark family and the oldest of the daughters.

D.W. has many alternate outfits: Her footsie pajamas, pink frilly swimsuit, red polka dot dress (usually worn to formal occasions), her Arthur outfit, gymnastics suit, and much more. In some of the books, she wore pink overalls. In "D.W. Thinks Big," she wore a solid pink dress to Lucy's wedding. In "Double Tibble Trouble," she wore dark green overalls. In the summer, she either wears a light-brown jumper and a white short sleeved T-shirt, or shorts and a blue T-shirt, like in "D.W.'s Deer Friend" when she went camping and in "Best Enemies." She also wears her blue T-shirt with gray jeans. In the episode "D.W. All Fired Up," she wore an orange long-sleeved shirt under purple overalls, with light green pockets. In "D.W. Swims with the Fishes," she wore a one-piece ordinary pink swimsuit instead of her typical pink frilly swimsuit.

In the books, her white blouse and pantyhose typically features pink stripes not seen on the television show, likely due to the budget/time constraints of television animation. The pink stripes were also present in the CGI film Arthur's Missing Pal. These are also often seen in promotional images, as well as most merchandise, such as stickers or plush toys.

Despite her superficial appearance, D.W. is often annoying to Arthur (he considers her a pest and once warned Sue Ellen that her name stands for Disaster Warning, though D.W. would later adopt DisasterWarning99 as her username for Virtual Goose) and sometimes, she takes pleasure in getting him in trouble, but deep down, she truly loves her brother and gladly works with Arthur whenever their family is in trouble. D.W. gets along well with most of her friends but often becomes very dramatic when things don't go her way and has a tendency of being very bossy. She is known for her many short-lived obsessions and temper tantrums, two of her longest-lived obsessions being Mary Moo Cow and the song, "Crazy Bus", both of which annoy Arthur to no end. She also has an imaginary friend named Nadine, whom she plays with and confides her problems to when no one else is around. She hates her full name and prefers to have everyone call her "D.W." instead. However, after learning the family history behind her name in "The Rhythm and Roots of Arthur," she comes around to liking it, and in "D.W. and the Beastly Birthday" it is implied in Arthur's futuristic dream that she eventually goes by her first name "Dora" as she grows older. She is a drama queen and also seems to be very protective of Kate.

Being a preschooler, she often doesn't understand the definition of words and when she tries to use complex words for her age, such as "taxpaying" or "orphans", she accidentally turns them into words like "taxipaying" or "organs".[11] She also doesn't grasp important topics like where babies come from, in which she thought that they come from a large baby store.[12] She believed that teachers live at school and was rather stunned when Mr. Ratburn, temporarily staying at the Read household, told her that he has a home of his own. She expressed that the world seemed simple until then.[13] Despite all this, she's been shown to be pretty smart for a kid her age, such as in "Arthur's Spelling Trubble" when she catches on that her mom is bribing her with ice cream to leave Arthur alone to study.

D.W. has cephalophobia[14] (the fear of octopods and squids), and once she endured a short-lived fear of fire drills (and anything else related to fire).[15] She is a picky eater[16] and once, she had a profound hatred of spinach.[16] She also does not like tomatoes and in preschool, they are allowed as her one thing she doesn't have to eat when offered.[17] She once had a snowball from "D.W.'s Snow Mystery", which was stolen from the fridge (apparently by aliens) and she frequently blames Arthur for its disappearance, which is a running gag. She did this continually until Arthur tried to make her feel better by giving her what looked like her snowball, at which point D.W. admitted he couldn't have taken it from her.

Despite being pretty smart for a kid her age, D.W. can also gullible/easy to fool:

She possesses a fondness for unicorns. She has a toy winged unicorn named Uni from the My Fluffy Unicorn franchise[21] and once decorated her portion of the family Christmas tree with toy unicorns and troll dolls.[22] She would like to one day have a real unicorn and has a display of troll dolls in her room which appears throughout the series despite the fad peaking in the 1990s.[23] D.W., like many children her age, also has a fondness for plush toys in general. She wanted the toy Tina the Talking Tabby for Christmas, but ended up receiving Quackers the duck, instead.[22] She also owns a teddy bear[24] and a plush rabbit,[24] among other stuffed animals.

She is also known to host at least six episodes:

And, despite being gullible, there are many episodes where she gets exactly what she wants at the end of the episode, usually by tricking people such as Arthur:

There is some continuity with specific methods of this running gag. One example is the Bowling Ball that was used in an attempt to form the third grade only Parade Float Club which easily fell apart so she could take over. D.W. kept the Bowling Ball and placed it on her floor to keep Arthur from sneaking in after dark.

Being a small preschool child, as well as the middle child, she feels oppressed, and will stand up for herself as best she knows how. She often cites what she remembers about civil liberties when she wants to tell on Arthur or when Arthur gets something that she initially did not get to be a part of. ("Dad's Dessert Dilemma" and "The Chips are Down") 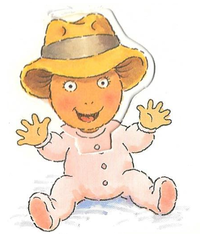 When D.W. was a baby, she originally had just clumps of hair, but in later seasons, it depicted her with a similar, but shorter, hairstyle. While D.W. was a baby; she was wearing a pink shirt, white disposable diapers, and pink socks. As such, she also had the same crib that had eventually become Kate's crib.

Not much is shown about her future life, though in "D.W.'s Time Trouble," she and Nadine looked older in one scene during D.W.'s dream where she wished that she was older than Arthur. A fantasy sequence in "D.W.'s Name Game" depicts an older version of her attending a concert of Arthur's and disrupting it by loudly eating potato chips. Her appearance is a taller version of her present self.

During Arthur's dream in "D.W. and the Beastly Birthday", D.W. is shown at age 9. She goes by Dora instead of D.W. ever since she turned 6. She wears a yellow sweater with a purple jacket, blue jeans and purple sneakers. "Dora" is written in Japanese across her sweater. She now wears orange frame glasses and a maroon headband. Her future look is reminiscent of the traditional Arthur outfit.

In the Living Books computer games, she had a brown complexion and orange hair in Arthur's Teacher Trouble and then had a pale complexion and dark brown hair in Arthur's Birthday, and she wore a purple shirt instead of a white one while wearing a jumper dress with white pantyhose or overalls. It was likely because of color and tone restrictions during the 16-bit era of computers and software. In these two games, she was voiced by Kelly Greenley, who has been one of only three women to voice D.W. in any form over the course of the Arthur-franchise. The other two are Elizabeth Telefus and the late Mary Kay Bergman, who voiced D.W. in the later games during the 32-bit era of computers and software (such as Arthur's Thinking Games).

Over the course of the long-running TV-series, D.W. has (so far) had six different voice actors:

D.W. lives with her family which consists of her father (David Read), her mother (Jane Read), her older and only brother (Arthur Read), and her baby sister (Baby Kate).

D.W. has many preschool friends such as Emily, the Tibbles and James.

In addition to the Arthur Adventure titles, D.W. has appeared in a number of titles in her own series, including:

Many of these titles were adapted for the television series, while some were initially aired as television stories and later adapted as books.