At Camp Meadowcroak, everything is a competition between girls and boys. Arthur has to make both sides work together to win the scavenger hunt against Camp Horsewater.

The episode starts out with Binky putting his toe in the cold lake, shivers before falling into Buster's arms and the two of them fall into the lake. Arthur speaks to the viewers about why parents send their children to camp: for punishment! Such as, it looks like a hamburger, right? Wrong! It's a worm-burger. After that at Monday, they serve macaroni-and-fleas. And how the hungry mosquitoes try to break into the tent. A tornado then comes and sucks up the boys tent. Arthur finishes by saying the worst part of camp is... The girls!

After the title card, it starts off with everyone at the camp bus stop. Arthur's mother brings him a stack of postcards stamped and addressed so he can write back. Before Arthur gets on the bus, D.W. comes running with Arthur's Bionic Bunny underwear. The girls laugh. Arthur angrily takes them from her and takes his seat on the bus. Soon, all the parents wave good-bye as the bus drives away. Arthur sits next to Francine. Binky beckons Arthur. He scolds Arthur can't talk to Francine because at camp it's boys vs. girls. Binky then pulls out some Grade "A" industrial-strength itching powder and attempts to use it on Prunella. However, the bus goes over a bump and the powder falls on him. He starts itching all over and everyone laughs. On the way, the bus passes Camp Horsewater. Outside, all the mighty Horsewater kids lift weights and exercise. Then everyone gets off the bus while camp counselor Becky introduces herself. At the meeting spot, she tells everyone about winning the all-camp scavenger hunt trophy. Arthur exclaims "Hey!" Binky tells Arthur that Horsewater has won the trophy three years straight. Then Muffy arrives in the Crosswires' Limo. James brings out Muffy's fur coat and her electronic air conditioner. Counselor Becky sighs. In the tent, Binky shows all the prank items to use on the girls such as stink bombs and wind-up mice. A few seconds later, the boys hear a metal sound and they exit their tent. They see their underwear hoisted up on a flagpole. Arthur madly walks up to Francine and shouts while looking at her "I hope you know this means war!" Arthur starts writing his first postcard:

Day one, Dear Mom and Dad, It's war! We made a surprise attack on the enemy today! But they were too tricky!

The boys chase the girls in the woods, but unfortunately, the boys fall into a pile of leaves. Now Arthur's family reads this next postcard:

Tomorrow we go head to head in a canoe race. It doesn't look good for our side!.

In the canoe race, Arthur and Buster are able to pass Sue Ellen and Francine, but the bad news is that they hit a rock and their canoe capsizes while the two girls pass them. Back in the boys' tent, Arthur finished writing this postcard:

Dear Mom and Dad, I don't know how much longer we can hold out against the girls. I can't tell you where I'm writing from! It's a secret! Just get me outta here! Love, Arthur

When Arthur finishes, the boys smell something funny. Arthur checks outside the tent. It's a skunk! Then the boys run away with their tent into the woods. The scene cuts to Brain reading the comics he brought with him. In the middle of reading, the boys hear a mysterious roaring noise. Everyone ignores it and Brain goes back to reading. The roaring occurs again. The boys go outside to investigate. They see some tracks on the ground. Brain compares them with the midnight ghoul tracks. They are the same! The boys run away, but they crash into Francine and Sue Ellen. It turns out that the girls didn't make the noise either. The boys said that the tracks were ghoul tracks. Sue Ellen investigates and figures out that they are bear tracks! Then everyone hears Muffy and Prunella screaming from a distance and soon find out that the Horsewater kids were making the noise. The Horsewater kids leave with one kid making bear tracks with a fake bear foot. Francine says "Lets get 'em!" Arthur changes the idea and comes up with another plan. Arthur said they could all fix the Horsewater kids at the scavenger hunt, but they have to call a truce. Everyone else declines, which made Arthur leave. As Arthur walks away, he said that he had a real stupendous surefire plan to get back at them. Everyone else quickly changes their mind and runs after Arthur to apologize. The next day, counselor Becky reads the search list. When she finishes, the search begins. Arthur and Francine read the list, need to find a balloon and remember they had one by the lake. A Horsewater kid sneaks in and takes the balloon. Now, it's Brain and Prunella and they need to find a pair of blue sunglasses. Brain remembers that he had some in his tent. Another Horsewater kid beats Prunella and Brain to the tent and steals the sunglasses. Finally, it's Sue Ellen trying to catch a spotted frog. Right when she approaches it, one more Horsewater kid dives in and runs away with the frog. Then Binky, Buster, and Francine walk with nothing, but Arthur's flashlight. Arthur then feels that it's time to put his surefire plan into action. As the three Horsewater kids chant, they hear a really loud roaring sound. The Meadowcroak kids run away and say there's a bear. The Horsewater kids fall for it. Then there's rustling in the bushes. A monster comes out. The Horsewater kids climb up a tree. Arthur shouts to the Horsewater kids, "Throw something at him!" The Horsewater kids throw everything from their sack, with the spotted frog escaping as well. Then the Meadowcroak kids run back to the starting point. The monster was Brain wearing Muffy's fur coat. Even though the Meadowcroak kids secured everything on the list, there was still one more item missing, a postcard! Arthur remembers he had one in his pocket. After he finds it, Camp Meadowcroak wins the all-camp scavenger hunt trophy! Arthur and his friends chant "Meadowcroak! Meadowcroak! We're number one!" Finally, the episode ends with a letter written on a postcard:

Dear Mom, Dad, DW, and Kate, Camp was great! I want to come back next year! Love, Arthur 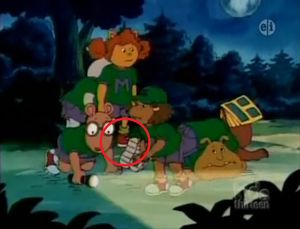