Despite D.W.'s warning of an alien invasion, Arthur and his friends camp out in the backyard. A jealous D.W. plans a prank to scare them off.[3]

Arthur is preparing for his first sleepover and he attempts to build a tent, but his mother calls him inside to eat breakfast. At the kitchen table, David reads an article in the newspaper about someone claiming that they saw a spaceship in Elwood City. This makes D.W. want to find a spaceship for herself.

Meanwhile, Arthur finds out that Buster's mom won't let him go to his sleepover, since she is worried that Buster will be scared. Arthur convinces his mom to call Buster's mom, and she soon agrees to let Buster go.

Later that night, Buster dreams about arriving at Arthur's sleepover, only to find out that Arthur and Brain are actually aliens. Brain dreams about aliens intending to do an experiment on him once he fixes their ship. Arthur dreams about D.W. wanting to come to his sleepover, which scares him.

The next day, the tent is set up and Arthur tries to bring the TV outside using an extension cord, but his dad prohibits him from doing so. That night, Buster and Brain arrive, and D.W. wants to join, but Arthur refuses to let her. They bicker for a bit before D.W. is called to come inside.

Later on, as the boys are getting ready for bed, they see a light floating. They think the object is a spaceship, but it is actually D.W. using a flashlight. The boys exact their revenge by making it seem like there is an alien outside of her window so they sneak into the shed to find a bowl, forks, kite rope, and other stuff then run back out.. Once D.W. finds out that she has been tricked, she confronts the boys, only to find what she believes is a UFO Brain, Buster and Arthur act like they're scared and then they peek out of the tent then when D.W. sees it she takes a bunch of pictures and yells she's rich then Arthur tells Buster to let the thing down so Buster releases the string off the steak with his toe and then down the prank lands, but it's actually a floating tin plate with objects strapped to it. Then when D.W. picks it up Arthur, Brain and Buster laugh.

D.W. leaves, feeling hurt, but Arthur and his friends were sorry, so Arthur invites her to join them. She does, but she then leaves and the boys go back to playing with their trading cards. 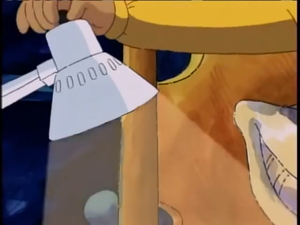