"Arthur's Lost Library Book" is the second half of the fourth episode in the first season of Arthur.

Arthur is at the library and talks to the viewers about the great things in the library, such as music to listen to, puppet shows for children, and books for everybody. He sees his friends looking through books they are interested in. Brain is looking at a book about science respectively. Francine is looking at a book on sports, and Buster is reading a joke book. He tries a joke on him, which makes them both giggle. Arthur loves being in the library, but remembers one time when he thought they wouldn't let him enter the library again. However, he says it a bit too loud, and someone shushes him from off-screen.

A rather ugly-looking hand reaches out and takes out a book from a shelf. A mysterious voice narrates the first chapter of the story: 'Arthur goes to the library'.

Arthur and his friends arrive at the library to take out some books, Arthur then sees various books one after the other and takes them out. Francine suggests he should just take one, but Arthur disagrees. At the front desk, he begins to check out, when Miss Turner tells him he can take out one more and shows him the new Scare Your Pants Off book titled "The Mysterious Hand". At this moment, the other kids see it and run toward it, but Arthur gets the first sprint and grabs it before they can. The kids try to have him give it to them, but he checks it out and prepares to go home. But the others continue to chase him and try using the fact that he has too many books to have him give it. But he disbelieves that he has too many and leaves on his bike, leaving his friends depressed. While riding home, he rides under a low tree branch and it knocks the top book, which was "The Mysterious Hand", off the stack and it lands on the sidewalk; Arthur doesn't notice though. A kid then comes by and picks up the book.

The ugly hand appears again, tears off 7 days off a calendar and says the second chapter: 'One Week Later'. Arthur's Mom is putting clothes in the washing machine and finds one of Arthur's misplaced books, she tells tells Arthur to be more careful. Later in the treehouse Arthur and Buster are trading cards, until Buster notices one of Arthur's books next to the wall, which Arthur forgot ever putting there. Buster asks if he liked "The Mysterious Hand". Arthur completely forgot he had it and Buster reminds him that there is a waiting list for that book once it's returned. At home, he finds many other books that he misplaced, but hasn't found the book he's looking for. Arthur looks around the entire house, but cannot find the book anywhere. His Dad tells him that he didn't have that book when he brought his books home. Arthur believes that one of the kids took it while he was leaving the library and goes to call Buster for help, but stops himself, for Buster's a suspect; everyone is. But Arthur knows that Binky wouldn't take the book since he doesn't like to read. Arthur asks Binky to help him find the book. He accepts, and they go off to find the book.

The voice from the horrid hand/D.W. is heard again, proclaiming the third chapter: 'The Investigation'. Arthur's friends and classmates get scared and scream. Binky and Arthur search their classmates for the book and resort to spying on those who are reading, but find that none of them have it. Later in the Sugar Bowl, Arthur tells Binky that he eliminated all suspects down to Buster, Francine, and Sue Ellen. Binky didn't have any luck, for everyone ran from him. Arthur has Binky focus on his suspects, and himself on his. Arthur continues to figure out the mystery at art class. He draws a picture of "The Mysterious Hand" book and shows it to Sue Ellen. She likes it and shows him the actual book. Arthur accuses her of taking it and tries to take it from her, but Sue Ellen explains that she bought it for the library version was the only copy, so he backs off. Later, Francine tells Arthur that she didn't take the book, for Muffy told her that Arthur thinks she took it. But Francine thinks he just lost it. Binky is still at work and is telling George to give it, but Binky isn't telling him what to hand over. Arthur comes and tells Binky that he should tell the others what he's looking for. But Binky thinks that if they have it, they should know and checks another student. Buster arrives and tells Arthur that Francine told him that Arthur thinks he took the book. Arthur thinks so, for he did want it. And, same as Francine, Buster thinks he lost it. Arthur disagrees, saying that he looked everywhere. This has Buster believe that Giant Mutant Mole People stole the book, which Arthur finds ridiculous. We zoom down and see that the mole people are real, but they didn't take it. Buster then declares that Arthur find the book soon, because there are many people wanting to check out that same book.

The hideous hand appears again and pulls back a curtain, informing the audience about the fourth chapter with ‘It’s lost, okay? Face it, you lost it.’ as the title. Arthur is having a nightmare in bed. In his nightmare, Arthur is hiding in the house from creepy-looking beings that are outside. Just then, the police tell him to give up the lost book. Suddenly, the door swings open and Arthur runs away from an extremely (literal) long arm that extends out and grabs him. It pulls him out of the house, across the sky and drops him in front of the library's front desk. Miss Turner is there; she informs Arthur that they give special rules to those who lose library books.

Arthur then has another nightmare; his Mom and Dad are in the hall and see a chain leading to Arthur's room. They follow the trail and see that it's connected to a book Arthur is reading. Arthur tells his parents that he now has to check out books this way. All of a sudden, the chain is pulled, while having Arthur being pulled with it. It turns out Miss Turner is turning a crank which pulls the chain. Arthur ends up at the front desk again and Miss Turner warns him not to make her use the crank next time. This has Arthur wake up screaming.

That morning, D.W. remarks to Arthur that he's not going to find the book in his cereal. His dad then tells him that he'll have to pay for the lost book. Arthur then says, “Fifteen dollars? That’s three action figures” before groaning over his bad luck.

Arthur then returns all the books back to the library; when Miss Turner asks if he enjoyed all the books, Arthur explains that he did, except the one he lost: “The Mysterious Hand.” He then says, “I guess I have to pay for it.”

The librarian lets Arthur know that the book was found, and that Binky just returned it. Arthur rushes to Binky and asks him who had it. He answers that it was someone from school, and finally Binky admits that it was himself. This has Arthur laughing, for he thinks he's joking. When he asks again, Binky, showing that he's serious, says that it was him; he then explains that he found it on the sidewalk and started reading it, and that it was really good. He further explains that he didn't know it was the one he lost, but when he knew that everyone else didn't have it, he figured it might be the one he's looking for. Arthur asks why he didn't tell him, and Binky claims that he would laugh. Arthur doesn't think so, but Binky knows he just did earlier. Arthur apologizes, but Binky warns him not to tell anybody that he enjoys reading books.

Arthur goes back into the library and asks Miss Turner if he can check out “The Mysterious Hand” again since he didn't read it the first time. Miss Turner tells him he can't renew it, for there's a long waiting list, which disappoints Arthur.

A shadow of the hand appears once again and tells the viewers that it's the end of the story, we then see that it was D.W. wearing rubber monster gloves and speaking into a cardboard tube the whole time. 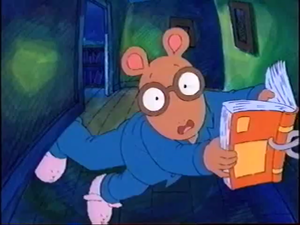