Sick as a Dog

"Sick as a Dog" is the second half of the eighteenth episode in the first season of Arthur.

When Pal gets sick, Arthur refuses to believe it has anything to do with all the food he's been feeding the dog and blames D.W. instead.

After Arthur does some playful commands to Pal, he explains to the viewers that Pal hasn’t been his dog for very long, but already, he’s learned many things from Arthur.

Arthur then mentions how Pal learned that he shouldn’t slip out of his collar during a walk. He remembers the time during a walk where Pal had tried to get in touch with another dog, but had run backwards and slipped out of his collar. Arthur had called out for Pal to stop, but Pal didn’t until both he and Arthur found a guard dog that eventually chased after them.

Arthur then explains that Pal has also learned that David's garden hose is not a chewing toy. Arthur scolds Pal for chewing on it and tries fixing it on his own with duck tape. When David starts it up, water gushes out of the teeth marks and sprays into his face. When he angrily calls Arthur’s name, Arthur then turns to Pal and asks him if he wants to go for a walk.

Sick as a Dog

One morning at breakfast, Arthur is feeding a few bites of his pancakes to Pal; D.W. notices and tells their mom. Jane explains to Arthur that he has his own food. For the rest of the morning, Arthur goes to his treehouse with Pal to read a book. He asks if Pal was done with the page he was reading, and Pal barks, which Arthur takes as an agreement. Arthur offers Pal some jelly worms that were from his Halloween candy bag. Arthur explains the chewing of gummy candy to Pal and then Arthur throws gummy balls into both their mouths.

At lunch, Jane wants to warn Arthur about feeding to Pal. However, she does not. D.W. asks for Arthur to hear a joke. However, after she says "Knock, knock!" Pal takes hold of D.W.'s food. Arthur tries to command Pal to stop, but Pal and D.W. still continue a tug-of-war over her food, causing D.W. to fall backward. Pal also only eats the hot dog as well. D.W. complains about Pal and wants to teach him a lesson.

As Arthur is in his room playing with his toys, he finds Pal not looking so well. He is lying down on his side, groaning. He explains the troubles to his mom and dad, who advise Arthur to let Pal rest. He may have to go to the vet if he isn't feeling better at all after his nap. The news spreads to his friends. Francine tells Arthur that her aunt's chameleon fled from the vet after climbing up on the wall and into a vent, through the grills, leaving him as a stray. (NOTE: Francine's Aunt's Chameleon ran past by in the foreground.) Buster then explains to Arthur that Pal cannot mutate colors or slide into a vent like the chameleon. Brain tells Arthur that the vet will find out what Pal's symptoms are. He explains to Arthur that vets know how to talk to pets. In an imaginary appointment, Pal tells the vet that his tongue hangs out and he starts to groan. He assumes that he should perform surgery. He turns on a saw that frightens Pal.

Buster tells Arthur that Pal may not need to go to the vet if he feels better immediately. Arthur agrees. Arthur sees an ill Pal who refuses to go for a walk. Arthur explains to David that it's Pal's favorite thing. D.W. thinks chewing on the hose was his favorite thing (which was not true). Arthur then gets worried what would happen next.

David and Arthur decide to go to the vet, and Pal is ushered to the doctor. Sue Ellen explains to Arthur that her snail (who is also groaning) is sluggish. David explains to Arthur that Pal will have to stay at the vet overnight. Arthur sadly tells Pal that he'll be fine. He assumes that he's allergic to something, which David agrees with. At dinner, Arthur is still in a bad mood and he hardly even eats his food. D.W. thinks of getting a new dog, which makes Arthur annoyed. While Arthur is in the living room, D.W. apologizes to Arthur for annoying him at the dinner table. She wonders how Arthur is feeling. She then explains that she had the same bad mood when her bird died, hoping this would help, but it just makes Arthur cry.

At the playground, Brain explains to Arthur that the vet may explain what Pal's symptoms really are and that Pal will be sent home on the next day. Buster and Francine agree. Arthur reckons the cause of the symptoms were done by D.W. Francine and Buster are shocked to hear this and they threaten to punish her. Brain decides to put her on trial.

Later that day, Arthur, D.W., and his friends decide to play "courtroom", where Brain poses as the judge, Francine, the lawyer, Buster, the jury, D.W. the defendant, and Arthur, the plaintiff. Brain accuses D.W. of making Pal sick. He tells D.W. to explain how she made Pal sick. D.W. gets defensive, and Buster assumes that D.W. is an alien replicate to take over dogs in an attempt to make way for an invasion because dogs would be able to tell who is an alien and who is not; this makes Arthur, D.W., Brain and Francine look at Buster in surprise.

Brain decides to plead D.W. guilty and Francine demands the proof and says D.W. may have to remain innocent unless she actually is guilty. D.W. decides to quit, but Arthur reckons he knows that she actually did it and tells her that he'll find what really happened to Pal. Buster then tells Arthur under his breath that she's an alien.

That night, Arthur has a dream - several guard dogs surround Pal in an animal control place where D.W. arrives just in time to open the cage for Pal to get out. Arthur answers the phone at home where he only hears Pal over the phone. The vet is tied up and other dogs flee from the vet. The snake uses the saw to break open the window's bars for the dog to allow Pal to get out of the vet. Arthur runs quickly to the scene and the vet tells them that the dogs are missing. Arthur realizes that Pal is missing and tries to call for Pal. Cut back to the present time, Arthur wakes up, turns on the light and remarks on the dream he had, calling it "ridiculous", and adds that Pal doesn't know the Reads' home phone number.

After Arthur returns to the vet, he waits for a bit, and initially thinks the nurse is talking to him when she says "Your dog — it had puppies." Arthur corrects her, saying that Pal is a boy dog; the nurse replies that she meant someone else, and the owner of the dog who had puppies (whom the owner calls "Skungie") leaps up in excitement, saying "Skungie had puppies! Woo-hoo!"

Finally, Pal comes out, and Arthur is glad to see him; Pal seems to feel better. However, the vet explains to Arthur that Pal is still slightly queasy and finally reveals his symptoms; Pal has gorged on a tremendous amount of food that he is not supposed to eat. When the vet asks what Pal had eaten the previous day, Arthur, feeling guilty, replies, “Pancakes, and two-year-old candy, and some gum, and then he swallowed a wiener whole... with mustard.” The vet gives Arthur a book that explains what dogs are supposed to eat in order to stay healthy. He then states that if Arthur actually did the same manner, his stomach would have to be checked as well.

While Kate, D.W., and Jane are outside, Arthur appears with Pal, and Jane says, “Look who’s home” while smiling. When D.W. asks what was wrong with Pal, Arthur explains that he made Pal sick by giving him things to eat before explaining the differences of stomachs between humans and dogs; Arthur then apologizes to Pal for making him sick. When D.W. reminds him, Arthur apologizes to D.W. for blaming her, and says that it really wasn't her fault; he also adds that he will try to convince Buster that she is actually not an alien. D.W. accepts his apology. D.W. had still planned to teach Pal a lesson.

D.W. then shows a dog training book that was rented from the library and makes Arthur read it to her. D.W. will then try to stop Pal from eating foods he shouldn't eat, in order to be able to the things dogs should do in the right-of-way. When all the training has been done, D.W. states to Arthur that she may have a dog similar to Pal that she wants so much in her life. 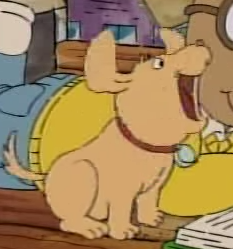