Instead of going with Buster to Camp Meadowcroak this year, Arthur has to go on a road trip with his family. After a series of misfortunes, the vacation may turn out better than he expected.

The introduction begins with a fantasy, showing Arthur and Buster riding in a canoe and being stepped on by a giant D.W. In real life, D.W. tells Arthur that he can’t go to camp this year, because the whole family is going on vacation to the beach.

After the title card, Buster then suggests to Arthur that should tell his parents that they need a vacation without the kids to relax.

Arthur tries, but his dad asks what to do with D.W. and Kate. Arthur then has a fantasy of his younger sisters having a tea party in his canoe. Arthur wants to go back to Camp Meadowcroak with Buster for the summer, and tries arguing that he is old enough to choose his own vacation, and that the beach is dangerous, but to no avail. However, after his dad mentions that he wants to take them all out for lobster dinner, Arthur decides that maybe the beach will be fun after all.

The next morning, the family leaves in their car, with D.W.’s huge inflatable shark “Sharky” tied to the roof. They see Buster in the bus bound for camp.

The family makes a bathroom stop and a stop to change Kate’s diaper. 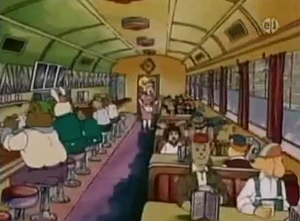 The interior of the diner 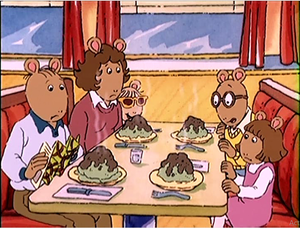 They have lunch at a burger joint. Since they sold the last burgers to a group of bikers, the Reads gets the “Chef’s Special”, which looks disgusting. D.W. starts a conversation with the bikers. When the family drives on, D.W. has a burger, while everyone else is munching sadly on chocolate bars.

Mr. Read sees an inflatable shark on a cattle truck, and realizes that he hasn't tied up Sharky properly. When D.W. finds this out, she throws a tantrum and screams. Mr. Read chases the truck to a gas station, where he gets Sharky back.

The parents tell the kids about the hotel pool and the lobster dinner, and everyone has beautiful fantasies.

At the Ocean View Hotel, they learn that they have lost their hotel reservation, and their room has been given to another family, because the journey took so long. They get a shabby small room instead, where the ocean is hidden behind buildings, and the pool is the size of a bathtub.

They go out for lobster dinner, but D.W. is scared and freaked out by the lobster, which she thinks it looks like a “giant bug”. Arthur, D.W., and Mrs. Read are disgusted by the lobster. D.W. tries to throw a tantrum, and proceeds to defiantly demand a hot dog (and no claws). Mrs. Read gets angry at D.W., and tells her to sit down and stop complaining, and then tells her that she can have a hot dog tomorrow when they are at the beach in a harsh voice of explanation.

There is a thunderstorm at night, and the roof leaks. It also rains the next day. Arthur wishes he was at camp with Buster. However, matters eventually start to get better when Arthur gets an idea from looking in a rolled-up newspaper (which he had originally planned to go after D.W. with, as she had accidentally hit him on the head while trying to smack a fly). The Reads visit a cow festival, go on a safari, take a tour of Flo's Fudge Factory, and go to see a movie. 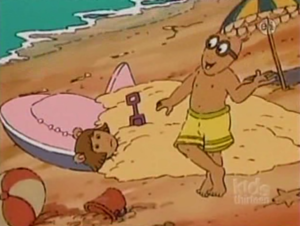 Eventually, the rain stops, and the family does enjoy the beach. Arthur buries D.W. in sand.

Back home, Buster tells Arthur how the camp was hit by a hurricane and lightning, and the lake was contaminated, finishing the episode.