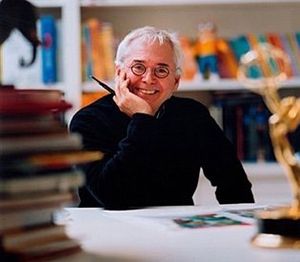 Marc Tolon Brown (born November 25, 1946) is the creator, illustrator, and author of the Arthur books. He is also the co-developer of the TV series. He has also served as executive producer of it since Season 10.

Best known as Arthur's creator, Brown has been working with the beloved aardvark for more than twenty-five years. Born one night when he was telling a bedtime story to his son, Arthur soon evolved into the book Arthur's Nose, published in 1976. Since then, he has written and illustrated more than thirty Arthur books, and has illustrated many other books—including one with his wife, author/illustrator and psychologist, Laurie Krasny Brown.

Brown was born in 1946, in Erie, Pennsylvania. In the third grade, he attended Lakewood Elementary were most of his life experiences would become a childhood sensation. His passion for drawing was kindled at age six by the loving attentions of his grandmother ("Grandma Thora"), who saved his artwork in her bottom bureau drawer. "I knew it must be special," he recalls, "because she didn't save many things." Besides encouraging his artwork, she bequeathed him her gift for weaving imaginative stories "on command" for her grandchildren. And it was she who built an education fund that helped him pay for art school at the Cleveland Art Institute, which he attended from 1964 to 1969.

Before creating the Arthur book series, Brown worked at various jobs, including stints as a truck driver, short-order cook, college professor, television art director, and children's book illustrator. In addition to his work with WGBH developing the Arthur television series, he continues to create new books.

As of this moment, Brown lives in Hingham, Massachusetts with his wife and young daughter. He also has two grown sons. His own childhood and the experiences of his three children are his main inspiration for the Arthur stories. His son, Tolon, is now a producer on the show.

Brown has released two titles for 2015, Monkey: Not Ready for School and The Little Shop of Monsters with Goosebumps author R.L. Stine.

In recent episodes of Arthur, he appears as an animated background character.