"D.W. the Copycat" is the second half of the fifth episode in the first season of Arthur.

D.W. starts acting, dressing like Arthur and following him around. Arthur's friends start excluding him because they don't want D.W. around.

D.W. is coloring in the pictures in Arthur's book. Arthur notices this and takes the book out of her hands. D.W. thinks that they forgot the colors, so she's filling them in; yet, they are supposed to be colorless. Arthur wishes that D.W. would change. He imagines her acting like the Brain. She bursts into his room and says she'll do his homework for him. She does so at an amazing speed. After she finishes, she and Arthur run outside to play ball. He also imagines her more like Bionic Bunny. Arthur is checking his bike which has a flat tire. D.W. flies down to him and takes him to get more air. Then Arthur imagines her in the form of a donkey. Francine, Buster, and himself are riding a carriage with D.W. pulling. Arthur has her going by luring her with a carrot on a stick. Buster wishes he had a sister which is a donkey too. Back in reality, Arthur thinks that any change would be better. Arthur knows that D.W. has broken the glass.

Arthur's mom is playing with Baby Kate with a stuffed bunny, until Arthur walks in all mopey and bored. Mom asks what's wrong. Arthur says that none of his friends can play with him at the moment. His mom suggests he should play with D.W., who seems to be bored also. Arthur doesn't agree, but he goes along with this as long as she won't annoy him. As Arthur and D.W. are going outside, D.W. jumps up and down and tells Arthur to let her know if she's being annoying, for she doesn't want to be. While they are playing baseball, D.W. takes out her Princess Sneeze-and-Wet doll to bat. But Arthur refuses to have her doll play baseball. D.W. thinks that everyone should get equal chances. Arthur is annoyed, tells D.W. that she's a baby and that she should play with Kate. D.W. denies this, but Arthur says she acts like one. Again, she denies it by showing Arthur she can do a headstand. Arthur is unimpressed and leaves the room as D.W. falls over.

Later, D.W. is watching Mary Moo Cow, until Arthur comes in and is about to change the channel. D.W. stops him, but he says he needs to watch the award-winning, three-part episode of Bionic Bunny. He and D.W. start to fight over the remote. They take this to the kitchen where their mom is working. Arthur and D.W. try to have their mom convinced. She asks them who was first. This was, of course, D.W., which has Arthur irritated. While she is watching her show, Arthur is exasperated at D.W. She complains that he won't do anything with her anymore. He claims that she does boring things and wishes that she was more like himself. She asks if he would play with her then. "Sure" he responds. This gives D.W. an idea. One day, the family is out on a picnic. Dad gives D.W. a banana and peanut butter sandwich, her favorite. Arthur asks for a watermelon. Suddenly, D.W. asks for a watermelon also. At the park, Dad asks D.W. if she would want to go on the swings. She is excited at this, until Arthur comes running and asks Dad to play catch. Immediately, D.W. wants to play catch too and runs up to catch the football, but she bumps into Arthur by accident.

Back at home, D.W. is watching TV. Arthur enters and is annoyed again. But as he leaves, the Bionic Bunny Show is heard on the TV, which surprises Arthur. D.W. seems to be enjoying the show, but Arthur asks if she is going to watch Mary Moo Cow. But she says that it's boring. While watching the show, D.W. copies Arthur whenever he gasps, laughs, or says anything. When the show is over, D.W. asks if he wants to watch Foreign Metallic Spelunking Squad. He agrees and asks if she wants ice cream. She too agrees. While Arthur is getting the ice cream, his mom asks if they're fighting over the television again. "No, D.W.'s finally got good taste," Arthur answers. He re-enters the den, gives D.W. the ice cream and they both eat and watch TV together.

Things get more strange the next day. Arthur is practicing the piano, while D.W. goes to try on her new clothes. When she returns, Arthur sees that she is wearing clothes that look just like his. Later, while watching Bionic Bunny, Arthur begins to notice D.W. acting strange. When they hear an inside joke on the show, Arthur laughs, likewise D.W. Arthur sighs at her copying him, and same as before, she does too. At the library, D.W.'s copying continues. Every time Arthur picks a book, does a gesture, or merely scratches his head, D.W. does also. In reaction, Arthur walks to the boys restroom. D.W. notices this, but bravely follows, causing all the boys (including Arthur's best friend, Buster Baxter) to scream.

Back at home, Arthur fills a glass of milk to drink, but D.W. copies this too. Arthur tells her to stop copying him. But she claims that they are just interested in the same things. Arthur takes off his glasses to clean them, but this has D.W. thinking again. The next day, Arthur's friends come over and Arthur comes out to get his bike. Likewise, D.W., who is now wearing glasses like Arthur's, does the same. This leaves Arthur's friends bewildered. While riding to the Sugar Bowl Buster asks what's with D.W. Arthur says that she has to come, for his parents are out shopping. But Buster was talking about the glasses. Arthur asks D.W. if she was wearing his old glasses, but they are actually her sunglasses without the lenses. Buster is confused at her acting and asks Arthur why she's acting like him. But Arthur doesn't know why she's doing this either. The kids begin to race the rest of the way. Arthur gets there last, excluding D.W. The friends enter the Sugar Bowl to get a table, while D.W. parks her bike.

As she locks it, Binky walks by and greets her, but he has mistaken her as Arthur. He enters the Sugar Bowl and says hello to the real Arthur. But, he gets confused due to that he already said hi to Arthur outside. When D.W. gets seated, the waitress asks if she wants a baby seat. But she rebukes the offer and again Arthur tells her to stop acting like him. Right then, Binky wonders which one is Arthur. Arthur confirms that he is himself and that the other is D.W. Once realizing this, Binky just laughs at D.W.'s looks. Arthur laughs too, but stops for that would mean he's making fun of him too.

At night, when Mom and Dad are saying goodnight to Arthur, he asks his parents if they could move without D.W. They decline this and ask why. He tells them about D.W.'s behavior and that he heard his friends talking. Muffy tells everyone that everybody is invited to her house for swimming except Arthur. They wanted to invite him, but they can't because they don't want his sister Arthur Junior to come. His parents suggest he should talk to D.W. about this. But he wants them to, but they tell him that it's between him and D.W. Arthur decides to try.

The next day, the Tibble Twins come over to D.W.'s house and ask if she wants to watch Vegetables Sing the ABC's. But she declines this and thinks it's for babies. They don't think so and tell her they sing backwards also. She tells them that she and Arthur are going to play soccer, but the Tibbles think that's boring and leave.

After they leave, Arthur tells D.W. that she doesn't like what he does and demands her to stop doing everything he does. "You mean that you think I should do the things I like, instead of the interesting things you like?" she responds. Hearing this, Arthur apologizes for saying that the things she did were boring. They both agree to play with each other sometimes too.

D.W. is heavily relieved and goes to change her clothes. But before leaving, D.W. tells Arthur that she can watch Mary Moo Cow as many days as he watches Bionic Bunny. Arthur wonders if he was tricked all this time. 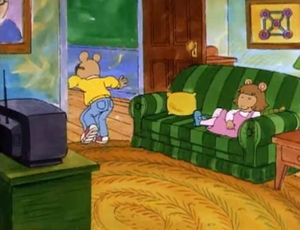