Arthur and the True Francine (episode)

"Arthur and the True Francine" is the second half of the fourteenth episode in the first season of Arthur. It is based on the book The True Francine.

Muffy and Francine remember when they first met in second grade, and how their friendship was almost ruined.

At the beginning of the episode, we see Francine climbing up a tree, through Arthur's window. Despite this, Arthur does not seem to notice Francine at all. Francine then screams, which now Arthur seems to hear. He goes down to the backyard with Pal and doesn't seem to find anything. While Arthur is in the backyard, Francine climbs back up and sneaks into Arthur's room and takes out a pair of Bionic Bunny underwear which she declines, and then takes out a pair of socks, one black and one white. It turns out to be a dare, from one of the girls at Francine's sleepover. Francine than asks Muffy, "Truth or Dare?" Muffy replies truthfully, in which Fern asks has she ever lied before. Muffy then takes a great insult that Fern would even suggest that she would do that, but eats her own words when Francine reminds her of a time when she lied in second grade.

In the flashback, Arthur's class is being rowdy while their teacher Mr. Marco is away. When he comes back they all pretend to be studying. Mr. Marco then introduces the class to Muffy Crosswire, their new classmate, and allows her to say a few words about herself. Muffy instead puts on a video presentation about her family history, which goes on for a long time. When it's done, she puts on another video about her birth, but Mr. Marco cuts her video short and tells her to take her seat, as they have to do their math lesson. At recess, Buster and the Brain are unimpressed by Muffy, thinking her to be conceited and out of place. Francine, meanwhile is giving Muffy a tour of the playground, and teaches her how to play kickball but kicking the ball out from under Buster. Muffy asks if there are any prizes like at her old school, but Buster tells her she's not at her old school, but just Lakewood Elementary, and calls her "Smartypants." She corrects him and says it's "Miss Mary Alice Smartypants." Francine is shocked to learn that Muffy's middle name is Alice, as it is also her middle name, and both Alices have the same spelling. The girls are ecstatic and at that point become best friends.

At Muffy's mansion, Muffy gives Francine a tour of the place, and shows off some of her valuables from around the world. She gives Francine a bracelet as a gift, saying it came from Antarctica. The two girls go swimming in Muffy's pool, but Francine is studying for a math test. Muffy doesn't seem concerned, saying she taught math at her school (But later displays that she doesn't know the word "subtraction" to heart). They then do some "wheelies," with Muffy's chauffeur James going on a wild run with Francine and Muffy in the back seats.

At the library, Francine and Buster are studying for the test, but Muffy goes to watch movies in the library (She was allowed to as long as she was quiet), and Buster tags along. Francine tries to remind her that they should study, but it is to no avail.

At Mr. Marco's class, the class takes the math test, and Francine seems to be confident in her ability to pass. When the tests are collected, Mr. Marco is impressed by Muffy's work, until he sees Francine's paper. He calls them up and points out that the tests are exactly alike, meaning one of the girls copied off the other. Muffy immediately denies doing it, so Mr. Marco sternly holds Francine accountable for cheating and forces her to stay after school for detention for two full weeks. 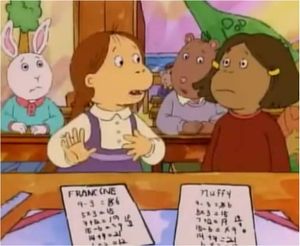 After school, everybody is concerned about Francine, as she will not be able to play in the baseball game against Mighty Mountain, which for them means certain doom. Muffy insists she can help them win, but then sees a downhearted Francine. Muffy offers Francine a ride in her limo, but Francine coldly refuses. Muffy apologizes for cheating, but insists that as a Crosswire, she has a reputation to uphold. Insulted that Muffy would betray her like that, she gives back the bracelet Muffy gave her, much to Muffy's dismay. Muffy later leaves a balloon and a gift basket for Francine as an apology, but Francine pops and throws them out, respectively.

On the day of the game, Francine is in detention while the team is up against Mighty Mountain. As the game comes near its end, Lakewood is losing 0-12. Muffy tries to bat, but evidently has no clue how to play the game. Realizing their precarious situation, Muffy goes to Mr. Marco and tells the truth about what she did. After accepting her punishment (which she finds totally unfair), she tells Francine that she can play now, and gives her the bracelet again as an apology. Francine forgives her and arrives just in time to earn her team their first home run, much to the shock of Mighty Mountain. The team ultimately loses, but Francine gets two home runs before it ends. She then rides Muffy back home, now best friends with her again, telling her that that they want her on the team, as the scorekeeper. But Francine tells her she has to learn to add, and one more thing: No cheating! 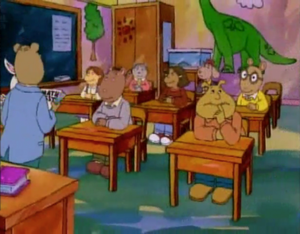