"Francine Frensky, Superstar" is the second half of the tenth episode in the first season of Arthur. It was later adapted into the book Francine the Superstar.

Francine lands the lead role in a school play and becomes a stage tyrant.

The episode starts off with Arthur's class auditioning for a school play. Buster tap dances on the stage while Mr. Ratburn takes notes and he taps his pencil to the music. Arthur, behind the curtain, tells the viewers that whenever they put on a school play, Francine gets bad parts which result in her getting hurt. The first bad part mentioned is the Cherry Tree in "George Washington and the Cherry Tree", where Buster as George Washington cut her down and she fell flat on her face. The next bad part is Sir Isaac Newton sitting under an apple tree (played by Muffy). Arthur stood on a ladder above them with a bucket of apples and dropped one on Francine's head to show how Newton discovered gravity. But then Arthur lost his balance and caused the rest of the apples, the bucket and himself to fall on Francine. The last bad part is the mighty cymbal in the orchestral orientation; Francine wore a cymbal on her head and Brain hit it very hard with a mallet. After Arthur is done speaking, Francine walks out on stage wearing a football uniform, falls and gets hurt once again.

After the title card, we then see Mr. Ratburn's class where he's giving them math problems to do. Then Arthur looks at Miss Sweetwater's class eating donuts, drinking milk and he licks his lips. Mr. Ratburn announces that it's time for the class to put on a school play and asks anyone if they have any ideas about what play they should do. Sue Ellen suggests that they should do a spooky story about a monster of mucus who gets his arms pulled off, but they grow back. Brain suggests that they should do a play about space and that he could make rocket fuel easily out of paper. Mr. Ratburn calls both their ideas good, but too complicated for them to do. He suggests that they should do a play about the inventor Thomas Edison. Francine asks if he invented anything that would hit her in the face, and Muffy asks if he invented the Dewey Decimal System because she thought Dewey was his middle name. Mr. Ratburn explains that Thomas Alva Edison invented the phonograph, which played music before CDs were invented.

Later that afternoon, as Mr. Ratburn is sitting in the auditorium assigning the parts, Arthur, Buster, the Brain, and Muffy approach and ask him to give Francine a good part because she has never had one. He says that he will.

The next day, Mr. Ratburn announces the parts: Buster will be the first light bulb, Arthur will be the first phonograph, Binky will be the locomotive and Francine will star as Thomas Edison. Everyone cheers for her and congratulates her. Francine promises she won't let the class down and will give 110% to her part.

Francine spends the next few days learning everything she can about Thomas Edison. When she goes to the library, she asks for the Thomas Edison section, only to learn that he's in the biographies and doesn't have his own section. Insulted, she declares the library to be "crummy".

She rents out all the books they had and heads home, refusing Arthur and Buster's offer to go to the Sugar Bowl because she has to "study her inventions". That night, at home, she messes with the lights in her apartment to study light bulbs and annoying her older sister Catherine, who is trying to read. Catherine suggests she learn about a phonograph or a video camera, but Francine messes with the lights some more, finally forcing Catherine to call their mother to tattle on Francine.

Francine goes to the local stores where she studies the phonograph, cameras and light bulbs. While she is in the hardware store looking at lightbulbs, Prunella and Muffy ask Francine if she wants to go to the mall. Francine refuses, but offers to let the girls study incandescent filaments with her. When Muffy calls that boring, Francine is insulted once again and tells Muffy that without lights she would have to shop in the dark, but according to her, she already does. Muffy starts to shed tears and runs out, making Prunella get ticked off. Francine points out it was Muffy who started it, and that she should be embarrassed for insulting incandescent filaments.

During rehearsals, Francine is examining everyone's costumes, which the Brain offers to mend with if there is a problem. Francine notices Buster's light bulb costume has air holes, which outrages her because if a light bulb had them, they wouldn't work. Buster needs them to breathe, but Francine forces the Brain to patch them anyway.

In class the next day, Mr. Ratburn is asking the class when the first light bulb was invented, but Francine tells him he's wrong to call it a light bulb, much to the class's shock. According to her, Edison invented the incandescent lamp, and the name "light bulb" stuck later. Mr. Ratburn agrees and then Francine signals rehearsal.

At the rehearsal, Francine is angry because Sue Ellen's camera costume has no sprocket holes, which would ruin the film. Mr. Ratburn takes Sue Ellen to the Brain to fix it. Francine then notices Arthur (dressed as a phonograph) is not wearing his bell because it echoes. She forces it on him and shouts that she'll "uninvent" (expel) him if he takes it off again and that he won't be in her play at all. Arthur is very annoyed by Francine shouting at him, because she really does not have the authority to expel anyone.

The class is at the Sugar Bowl and deeply regrets asking Mr. Ratburn to give Francine a good part, because she acts like it's her show, not theirs. Arthur asks Muffy if she'll talk to Francine, but Muffy says she's not speaking to her. Prunella explains how Francine insulted Muffy's clothes. Binky threatens to pound Francine and pounds down on his soda to demonstrate, but gets stained with soda. Arthur plans to reason with her, but Francine refuses to accept his phone call because she is still studying her inventions.

The next day, the class prepares to put on the play for the kindergartners. Buster can't breathe because his light bulb's air holes are now sealed by bandages, but Francine doesn't care. Arthur tells Francine flat out that everyone is angry at her because of how she's treated everyone, but she cooly brushes it off because "they don't have her talent at winning personality". Fed up, the students vow to teach Francine a lesson.

During the play, before it starts, Muffy welcomes everyone and refers to Menlo Park as "Mental Park". Francine pops out of the curtains and angrily corrects her. In the first scene, Francine as Edison presents Arthur as the phonograph. Instead of playing music, Arthur does phone imitations which amuses the audience, but makes Francine annoyed.

Next, Francine presents the first light bulb. She pulls down the sheet covering Buster and discovers that he has a huge grid in the front of his costume, but covers up her shock by acting like it's supposed to be there. When she flips on the light to turn him on, he squirts her in the face with a water gun, annoying Francine once again.

Then she uses her kinetoscope (Sue Ellen) to film "The Great Train Robbery". Binky chugs along until the robbers (Jenna and Muffy) rob him. They mess up the act when Binky beats back the robbers, telling them to "put 'em up!", in which everyone on stage starts dancing afterwards. The play ends, but Francine tries to stop the closing curtains, but ends up getting knocked onto the stage floor. As a result, her classmates were making mistakes on purpose to turn the tables on her for her entitled attitude.

Later, Francine is sobbing in the dressing room, humiliated at what her friends did to her. Mr. Ratburn is disappointed as well and asks that the kids make improvements before the parents' show. Francine blames her friends for messing up her show, but they explain to her that it belongs to all of them and that they all worked hard to put on a good show. Francine thinks this over, realizes what a poor sport she has been, and apologizes for her bad reputation. She then asks if they would be willing to help her put on a great show together, and they happily agree.

That night, the parents' play goes well and is a total success. As they take their bows, Francine gives credit to her whole cast for its play. But after the curtain closes, she says they couldn't have done it without her. This causes her friends to pull her back behind the curtain even though she hasn't actually finished what she said yet as the show ends. 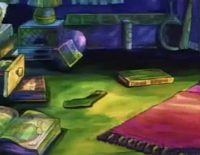