Every episode of Arthur has a title card which displays the title, the name(s) of the writer and storyboard artist, and a short animation encompassed within a center circle. Season 1 originally used six different title cards, but later seasons introduced more. With the exception of early versions of Season 1 episodes, the title is spoken aloud by either Binky, Buster, Francine, D.W., Muffy, Brain, George, Sue Ellen, Ladonna, and Arthur. The title card occurs 0:40 - 2:15 minutes into the episode. After Season 1, the typeface for episode titles was modified and have double-story lowercase "a"'s instead of single-story ones. The title names were enlarged starting with Season 10. The title cards were replaced with a scene from the episode, making them all unique, starting with Season 16 in the United States and Season 14 internationally.

In the following list, each title card has a list of episodes that use it. The name in parentheses is the character who reads the title aloud. 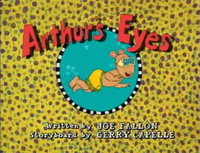 The center circle is full of water. We see fish swim by, followed by Pal, followed by Arthur. He says "Hi!", but sometimes he will say something else like "Yay!". Sonar sounds are audible in the background.

This title card is usually used in episodes in which Arthur is the central character (or Pal, in early episodes). The first title card made for the series, it was the first out of the original six title cards to be made for Season 1. It was retired after Season 14 in the United States, and after Season 13 internationally.

In "Fern's Slumber Party", when Fern suggests thatthey should move on to the title card, she says "Maybe that swimming one", also breaking the fourth wall saying it. 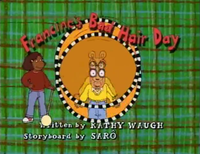 In a parody of the Rank Group logo, Francine walks up and hits the center circle with a banging noise similar to a gong. This causes Arthur to yelp and begin shaking. The sound of Arthur yelping was changed in Season 11. Initially, Arthur would yelp the instant he comes up, but in later seasons, he would do so after he comes up, and in some occasional cases he is silent.

This title card is commonly used for episodes in which Francine is the central character. This was the second title card of the original six made for Season 1. Out of all the title cards used, this one was shown the most (30 times), along with Arthur Looks for an Umbrella. This title card was used at least once per season for Seasons 1 through 14.

In Israel, this title card is used as the series title card, appearing at the end of the intro. 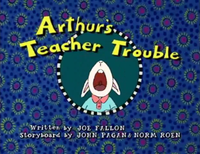 Buster walks into the circle, and roars (a parody of the MGM Lion logo), burps, trumpets like an elephant, or another different sort of sound (such as a rooster or a horse sound) for most title cards. After he does, Arthur walks up beside him and laughs. The sound of Arthur laughing was changed in Season 3, but the original sound returned in Season 12, although the original sound was retained in the Season 5 episode, Nerves of Steal.

This title card is commonly used for episodes in which Buster, and/or Arthur is/are the central character(s). This was the third title card of the original six made for Season 1.

Arthur Looks for an Umbrella 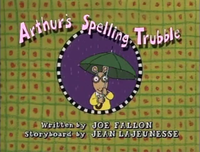 Arthur does a Ta-da! pose (and in some episodes says "Yeah!" or "Hey!"), but it starts to rain. Arthur rummages through a rubber ducky, a spaghetti strainer, and a bike horn before finding an umbrella, which he promptly uses.

This title card is primarily used for episodes that involve some sort of minor calamity and/or Arthur is the main character. This was the fourth title card of the original six made for Season 1. Out of all the title cards used, this one was shown the most (30 times) along with Francine Hits Gong. 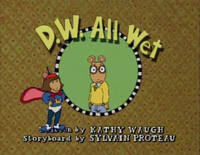 This is another title card commonly used when episodes focus on D.W. and/or Arthur. This title card was the fifth out of the original six to be made for Season 1. It was retired after Season 13. 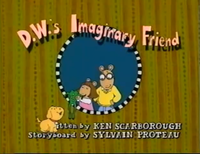 D.W.'s pet frog Toady is being chased by Pal, D.W. says "Wait! Come back!", Toady returns to D.W., who embraces her. Sometimes D.W. will just scream, then say "Hey!" when she picks up Toady.

This is one of the title cards commonly used when episodes focus on D.W. and/or Arthur, especially with one of their pets. This was the last title card to be introduced out of the six that were made for Season 1. 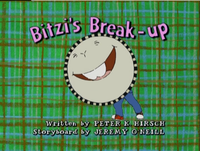 Buster is searching the sides of the center circle, he goes behind it and it magnifies his face. He either says "Hey!" or "Ah!".

Mostly used for episodes revolving around Buster. This title card was introduced in Season 3.

Arthur is seen sneaking away from the Central Circle's view just as D.W. passes in front of it looking for him. She looks for Arthur within the circle only for him to peek at her from behind unnoticed before hiding behind. D.W. gives up and says his name only for her side of the circle to rotate 180 degrees to show Arthur in Central Circle's view where he says "Shh!" to the audience.

This title card is usually used in episodes involving secrets and/or Arthur and D.W.. It was introduced in Season 2. This title card was retired after Season 14.

D.W. walks up to the center circle, looking for Arthur and opens the shower curtain. Arthur is behind the shower curtain, taking a bath and screams or yells "Hey!" when he notices D.W. He is embarrassed and sinks lower into the bathtub. Sometimes D.W. may meekly say "Oops", or scream herself ("Ihh!") or be silent. On at least two earlier episodes, Arthur yells "D.W.!" after the "Oops".

This title card is usually used in episodes about embarrassing situations. It was introduced in Season 2. This title card was retired after Season 14. 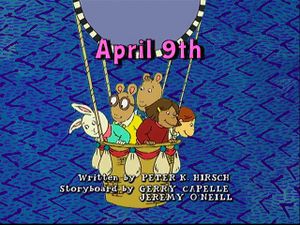 Arthur, Mr. Read, Buster, Francine and Muffy go up in a hot-air balloon, with the center circle being the balloon.

Used in episodes about groups of characters. Introduced in Season 5.

Arthur pulls down a lever and a picture of the center character appears. The only 4 characters seen for this title card are George, Muffy, Sue Ellen, and the Brain, whom there's only one for. A slot machine sound is heard when each section of the face appears. Arthur does a ta-da pose. 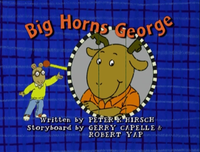 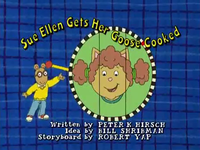 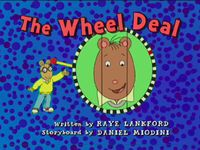 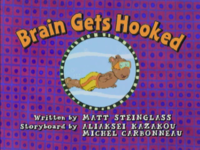 Identical to Arthur Underwater, but Arthur is replaced by Brain, the fish are dark grey and Pal is darker. Brain originally said “Yeah!“, but after his voice actor changed to Steven Crowder, he said "Hey!" On other occasions, he says nothing. 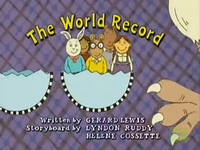 Arthur, Buster, Brain, Muffy, and Francine work together to break the egg they're in, the top half cracks open and falls to the left. A large bird claw then appears and they all gasp and clear the screen. Starting with Season 11, the sound of everyone gasping was changed, and Muffy yells "Aah!" as she runs away.

Mostly used for episodes involving many of the characters. This title card was first used in Season 5. 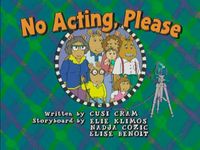 The Read Family is taking a photo, they're all ready until suddenly, Kate starts crying. But it's too late because Arthur has taken the picture and it turns out chaotic. Thora pushed David and tries to kiss Kate and Grandpa steps back.

This title card was used in episodes dealing with family matters or the Read Family are central characters. It was introduced in Season 2. 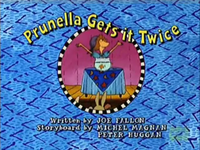 Prunella is performing as a fortune teller on stage, saying: "now, I predict that you will shortly see...", at which point the lights flicker and go out with a zap and the title is spoken.

This title card was introduced in Season 4, where it was also part of a scene in the episode "To Beat or Not to Beat", and has since been used for episodes where Prunella is the central character.

Binky is chewing pink gum and blows a bubble that pops once it reaches the size of the center circle. Strings of gum hang everywhere, he struggles, but is unable to get out.

Used usually in episodes with Binky as the central character. This title card was introduced in Season 2. 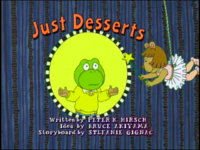 D.W. swings down, tied to the end of a rope, in a fairy costume; she uses her wand to make Arthur appear and do a Ta-da! pose, and promptly turns his head into that of a frog or toad that croaks. Popping sounds are heard when she uses her wand. This is one of two post-Season 1 titles to have the edges of the circle vibrating, similar to the Season 1 title cards (the other one being Pal Howls).

This is another title used for episodes focusing on D.W. herself. This was introduced in Season 5. 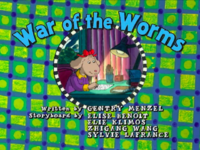 Fern is pictured in the central circle, sitting at a desk and writing intently.

This title card was first utilized in Season 10, and has since been used when Fern is the focus of the episode.

Unlike the other title cards (before season 16) Fern Writing shows an actual image from an episode, namely Fern writing her first letter in "Fern and Persimmony Glitchet".

Buster Arrives on a Spaceship

A spaceship, the central circle, flies in and lands (causing dust clouds to form) with what looks like a blue alien that has red eyes. The top half of the circle, which is transparent, opens to the right and the alien reaches for its head, starting to twist it. It pops off, revealing a smiling Buster wearing an old-fashioned space suit and a helmet.

Usually used in episodes with lots of science fiction, futuristic themes, and/or Buster. Introduced in Season 3. 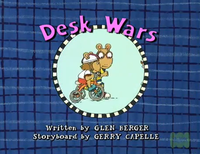 Arthur starts running, then the rest of the kids start running after him. Arthur jumps on the back of D.W.'s tricycle or (sometimes he says "Yee-haw!" or "Yahoo!").

This title card is used when it's about Arthur and his friends or bicycles/sports. Introduced in Season 2. 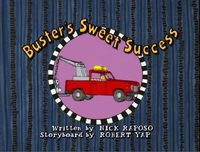 A man is in his car while it is being towed along the road.

Used in episodes involving cars in the plot. This was the last of the intertitles to be introduced, as it first appeared in Season 6. 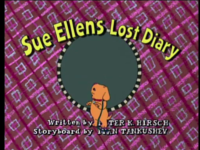 Pal sniffs around, howls, sniffs again, and walks away. This is one of two post-Season 1 titles to have the edges of the circle vibrating similar to the Season 1 title cards (the other one being Fairy D.W.).

Originally used for episodes dealing with losing something/someone or scary/sad situations, but later became used mostly for episodes focusing on Pal and Kate. This was first used in Season 2, and was the first title card to be made outside of the original six that were made for Season 1. It was retired after Season 14. 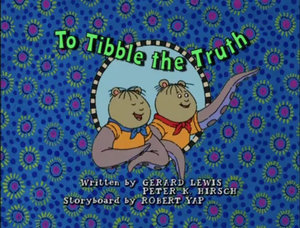 D.W. is sitting, enjoying a book until some octopus arms, coming from the centre circle, grabs her shoulder. This causes her to scream and run away (sometimes she is still screaming off camera). The Tibbles then come up from under the octopus arms, revealing that they are the ones that were responsible, they then laugh.

Used when one or both of the Tibbles are the central character(s). First used in Season 3. It was retired after Season 13.

A short clip from the actual episode is featured in the circle. First used in the "The Good Sport" from season 6, and "Buenas Noches, Vicita" from season 11. While North American airings continued to use the old style title cards, the scene title cards became the only title card type for international airings throughout Seasons 14 and 15. They became the universal title card style in Season 16, being used to present. These have also been used on remasters of Seasons 1, 2 and 3 in syndication internationally. 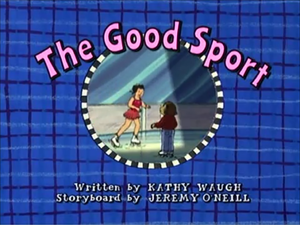 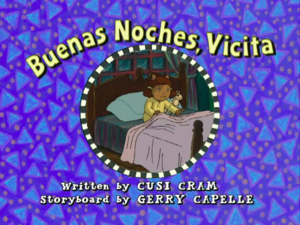