From 18:00 Jan 23 to 00:00 Jan 24 NY Time (6 hrs), Grifkuba sites will experience flaky behavior, including short periods of downtime. Reading and light edits should be fine, but save all work and avoid heavy edits. 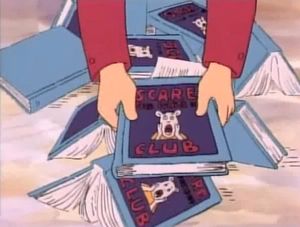 The Scare-Your-Pants-Off Club is a series of children's horror novels written by E. A. DePoe.

The series first appears in "Arthur's Lost Library Book." At the Elwood City Public Library, a new copy of The Mysterious Hand comes out and Arthur is the first to check it out, but he loses it. In a later Season 1 episode titled "The Scare-Your-Pants-Off Club," all of the kids wait in line at the library for the release of the new book. They are disappointed when they learn that P.A.W.S., or Parents Against Weird Stories, has banned the books from libraries. At the end of the episode, it is revealed that Ms. McWord writes the books, and also signed a petition to get the books un-banned.

In the Season 8 episode "Fernkenstein's Monster," Fern donates all of her Scare-Your-Pants-Off Club books to the library book sale, finding them too tame after reading Frankenstein. Given that Fern has not mentioned the books since, it is possible that she might have outgrown them.