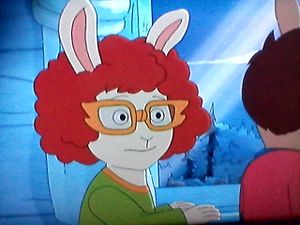 Flashback from "Fright Night" shows Bitzi as a young girl

Bitzi is a white rabbit with auburn hair. She wears yellow glasses, a pink dress and wears a dark bluish-green coat over her dress when going to work.

As a child, she wore the same style of glasses and hairstyle.

She and Buster are best friends, and they even have their own handshake. They do everything together, such as going to movies and going grocery shopping, while also seeing how fast they can get everything before getting to the checkout.

She is overprotective of Buster, and at first, she did not allow Buster to go to Arthur's sleepover because of a so-called UFO sighting (although she changed her mind after Buster assured her he wouldn't be scared). Despite her kind nature, she often becomes frantic when problems occur, because she is trying her best to raise him without a male role model in the house to influence him.

Early on, she was depicted as something of a worrywart, often panicking and becoming concerned for Buster's well-being over very minor things. However, in more recent seasons, she is shown to have become more relaxed, and also seems to trust Buster more often than not.

She dated Harry Mills starting in "Bitzi's Beau", and they broke up with each other in "Bitzi's Break-up". Since then, she has not had a boyfriend.