Mr. John Morris is the former janitor for Lakewood Elementary School. In "April 9th", the school was damaged by a fire and John Morris broke his leg. Because of his leg, he retired and moved to New Mexico, onto his daughter's ranch. Though he moved in Season 7, he made a couple of non-speaking appearances in episodes like "Francine's Pilfered Paper." In the Postcards from Buster episode "Alien Adventure" he appears when Buster visits Roswell, New Mexico. He appears in a flashback in the Postcards from Buster episode "Coming Together". The flashback reused a part of "April 9th," when Buster goes to visit him in the hospital.

In "Strangers on a Train," John Morris is seen in a green uniform, appearing to be working as a janitor for the train station, implying that he worked there at some point.

It is said that he used to be a dog groomer, he can speak Portuguese, and he likes to play his accordion named Beatrice. 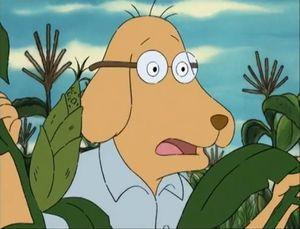