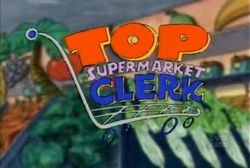 Top Supermarket Clerk is a reality show which was Buster's favorite show after losing interest in Bionic Bunny. He had said that Bionic Bunny was just "made up stuff". Jane Read, D.W., and Baby Kate are shown to watch it. It was only seen in Buster Gets Real, and mentioned briefly by Buster in Caught in the Crosswires. It is produced by Reality TV. Every week an episode airs and one of the contestants gets eliminated. Oddly, the contestant that is eliminated in one episode always returns in the next one.