Bubby was the fun and energetic maternal grandmother of Francine and Catherine, and the mother of Laverne, and also the mother-in-law of Oliver.

She first appeared briefly in Arthur's Perfect Christmas, but became recognized larger in Is That Kosher?. She went to Francine's family's apartment to celebrate Yom Kippur in "Is That Kosher?".

In "The Great MacGrady," it was revealed that her husband died of cancer. She is one of two guest stars that have returned with speaking roles, with Lance Armstrong being the only other guest star.

Laverne and Bubby have a good relationship, as they are mother and daughter. Bubby at times picks on her daughter (along with her son-in-law), saying that she hardly feeds Francine and Catherine, as well as when she says that their apartment is not clean.

Francine and Bubby get along well too, and Francine seems to be the person with the most interaction with Bubby. The two do many things together.

Not much interaction is seen between Oliver and Bubby, but it can be (deeply) assumed that she loves him a lot.

When Bubby arrived for Yom Kippur, she energetically embraced both Francine and Catherine and called then her "favorite grandchildren". She then told Catherine that, although she was turning into "such a beauty" that, "...blue really isn't your color, darling..." 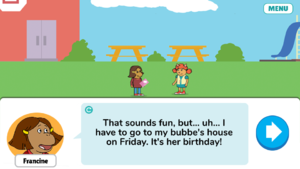 "Bubbe" is a word originating from Yiddish which means "grandmother." Since there is more than one way to spell the word in English, official PBS sources have variously used Bubby[1][2] Bubbe,[3][4][5] and Bubba.[6][7] On this wiki, "Bubby" is preferred because it is the spelling used in actual dialogue in "Is That Kosher?"[8] In "Francine's Tough Day," Francine refers to Bubby as "my bubbe."