"Baseball Blues" is the first half of the seventh episode in the sixteenth season of Arthur.

It's Grebelings season and George can't wait to play! After all, no one knows more about baseball than George. But when he realizes knowledge of sinkers doesn't guarantee success in the field, will he throw in the towel?[5]

George has a fantasy where Wally is a sports announcer, and George is a player for The Grebes. In the same fantasy, George imagines that he gets a home run on his very first game of baseball. After his fantasy, George goes out of his room, ready to play baseball for the first time.

After the title card, George is seen talking to Mr. Frensky about the cancelled World Series in 1994. Arthur is surprised and doesn't know that George knows so much about baseball. George says that baseball has always been a hobby of his. Mr. Frensky then asks Francine to hit a few balls out to George and Arthur, but Francine experiences batting difficulties. George teaches her a few tips from a website, and Francine is finally able to hit the baseball. Everyone else on the team asks George for advice, but Mr. Frensky asks the others to let George get some practice in. He then welcomes George to the Grebelings.

Seeing that George is upset, Mr. Lundgren makes George a bat called "The Lundgren Slugger". George feels much more confident, and is excited to play baseball.

However, George doesn't play baseball as well as the other Grebelings. At their next few baseball games, George performs worse and worse, compared to the other members of the team.

When the Grebelings get ice cream at The Ice Cream Shop, they learn that Harry Mills from the Elwood City Times will be doing a story about the Grebelings. Everyone is excited, except for George.

George has a dream that night where he can't lift the bat at a Grebes game. George and the other team members get bowled over with a bowling ball from the other team, to which Wally then yells, "Strike!". George then wakes up from his dream.

The next day, George goes to the Frenskys' apartment to say to Mr. Frensky that he chose to quit the team. But when George finds out that Francine is sick, he decides to come to the game.

At the game, George talks to Francine over the phone about the game's status, and even interviews Harry Mills, who is also at the game. The Grebelings end up winning the baseball game, and George finds his forte as a sports announcer. Later on, when Francine is feeling better, George becomes the Grebelings' first announcer, finishing the episode. 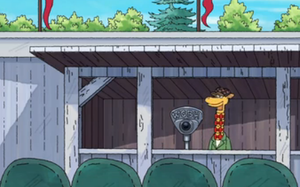 "WGBH" on the microphone