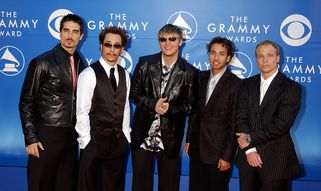 The Backstreet Boys in 2002

In the early nineties Howie, AJ and Nick were performing as an amateur trio in Orlando, Florida. They were joined by cousins Kevin and Brian.

In 1992 record producer Lou Perlman placed an ad in an Orlando newspaper that he wanted to form a vocal group. Hundreds of singers auditioned and eventually all five friends were chosen and named Backstreet Boys after Orlando’s Backstreet Market.

The group turned professional in 1993 and released their first single in 1995. They were immediately successful in Europe, but largely ignored at home.

In 1998 they had their first chart successes in the United States. In 1999 they released their third album “Millenium”, which included the hit single “I Want It That Way" and made them worldwide superstars. Their 2000 album “Black & Blue” was equally successful.

Between 2002 and 2004 the band did not record or perform, but they reunited in 2004 and have been performing and releasing continuously since then. Between 2006 and 2012 Kevin temporarily left the group.

In 2019 they released the album “DNA” which topped the Billboard charts again.

The Backstreet Boys on Arthur[edit] 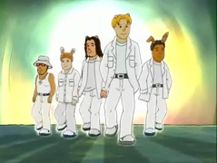 The Backstreet Boys on Arthur

The Backstreet Boys appeared as themselves in the second Arthur special Arthur-It’s Only Rock ‘n’ Roll in 2002. They are seen in a cartoon version of their music video to “I Want It That Way”, featuring Muffy. They also appear in Muffy’s fantasies where they perform the song “Manager of My Dreams”. They give a concert in Elwood City and perform “Nothing But the Music” with U Stink.

As the end credits roll, the Backstreet Boys perform the Arthur theme song “Believe in Yourself”.

The DVD includes a ca. 6 minute documentary about turning the Backstreet Boys into animals and recording their voices.

Relationships to Other Characters[edit]

Muffy is a dedicated fan who is originally in love with Nick Carter, but is disappointed by Nick’s lack of business acumen in Arthur-It’s Only Rock ‘n’ Roll, causing her to switch to Howie. In Bitzi’s Break-Up she mentions that she now fancies AJ.

Fern and Prunella also reveal themselves to be fans, and most major characters attend the Backstreet Boys concert which is sponsored by Ed Crosswire.