3rd Grade Female Bear is an unnamed Mighty Mountain student who made her first appearance in the episode "April 9th." She was also part of the kids that were listening to the story about the fire at Lakewood, which was being told by Buster. In addition, she was seen running for Mighty Mountain's track team at the beginning of "The Pride of Lakewood." 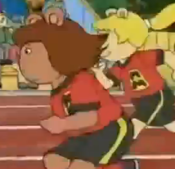 Competing in a track race in "The Pride of Lakewood."

3rd Grade Female Bear is a bear with a grayish tangelo complexion. She wears a pale light grayish amber collared shirt, long blue jeans, and red and white sneakers. She has dark tangelo hair in the form of a bow cut.

Starting from Season 16, she has a new design. She now has a grayish brown complexion with moderate orange hair, and wears a grayish fuchsia button-up shirt with a light fuchsiaish gray collar, light cobalt bluish gray pants, and sea greenish black shoes.

In "The Pride of Lakewood," she wore the Mighty Mountain Track and Field Team uniform consisting of a moderate scarlet jersey with a moderate gamboge square that says "MM" in dark gold text and dark olivish gray shorts with moderate olive stripes on either side.